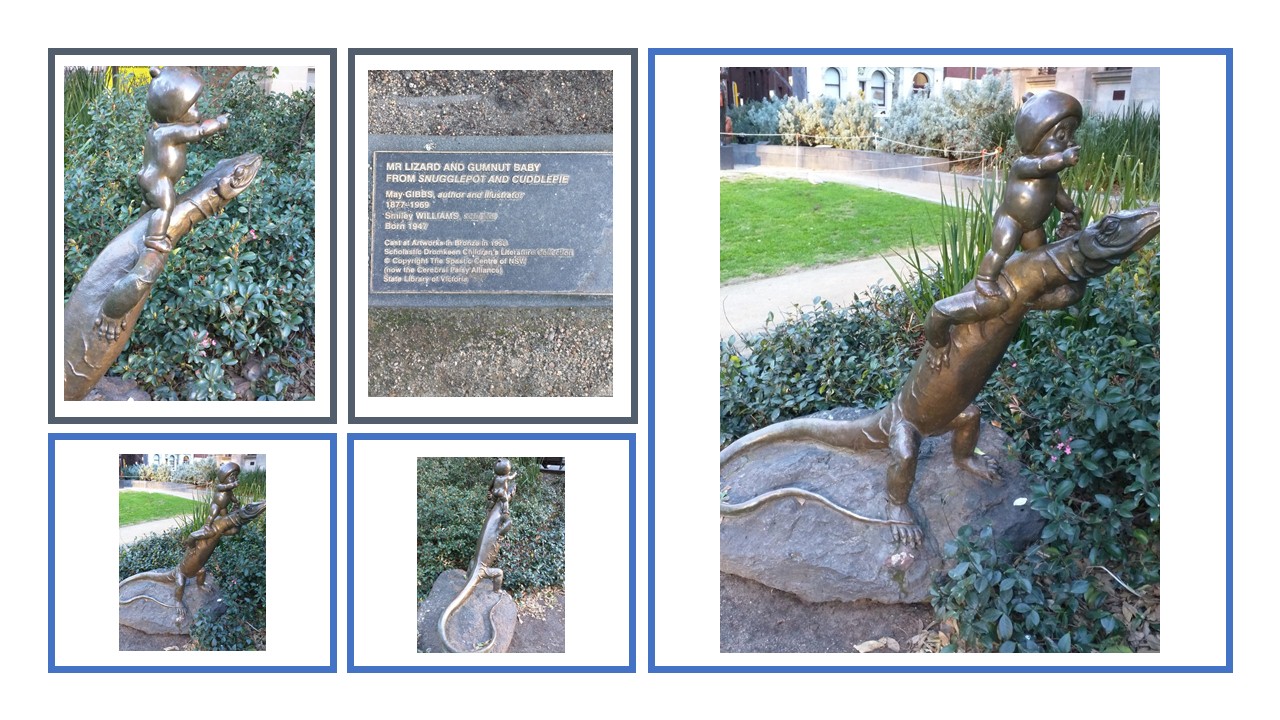 Children’s author May Gibbs’ beloved stories about the tiny, human like “Gumnut Babies” are immortalized in bronze.

It’s an odd sight at first: a strange looking helmeted baby riding high on the back of a grinning, long tailed lizard. But this bronze statue captures the adventuring spirit of “Snugglepot and cuddlepie,” a beloved series by author/illustrator May Gibbs, inspired by her experiences in the bush of her Australian childhood home.

In Gibbs’ children’s books, written from 1918 on-wards, Snugglepot and Cuddlepie are brothers, and just two of the adorable “Gumnuts,” wide eyed, fairy like, rosy cheeked wee creatures who get into all sorts of trouble and live in the Australian bush. Their design was based on the look of young Eucalyptus tree nuts, with the female toddlers further adorned with flower hair, hats, and skirts.

The Gumnuts spend much of their time trying to avoid shaggy, cone like villains, the “Big Bad Banksia Men” and other neer-do-wells like “Wicked Mrs. Snake.” Gibbs magical world includes babies from other flowers and other anthropomorphized, well dressed Australian Animals (Somewhat akin to Wind in the Willows) as well.

The statue, created by artist Smiley Williams and stationed outside the State Library of Victoria, features Snugglepot riding Mr. Lizard, a Goanna who is a great friend to all the babies (and the nemesis of Wicked Mrs. Snake). Over the years the charming and idealistic escapades of Snugglepot and Cuddlepie have been adapted into a play, musicals, and even a ballet as well.

The Gumnut statue is one of many found on the front lawn of the State Library of Victoria, a historic landmark in Melbourne. The statue is located in the forecourt, pointing toward the library entrance. The statue of another Australian literary icon, the Bunyip of Berkeley’s Creek, also stands outside the library. Visit the library’s website for opening hours and directions.