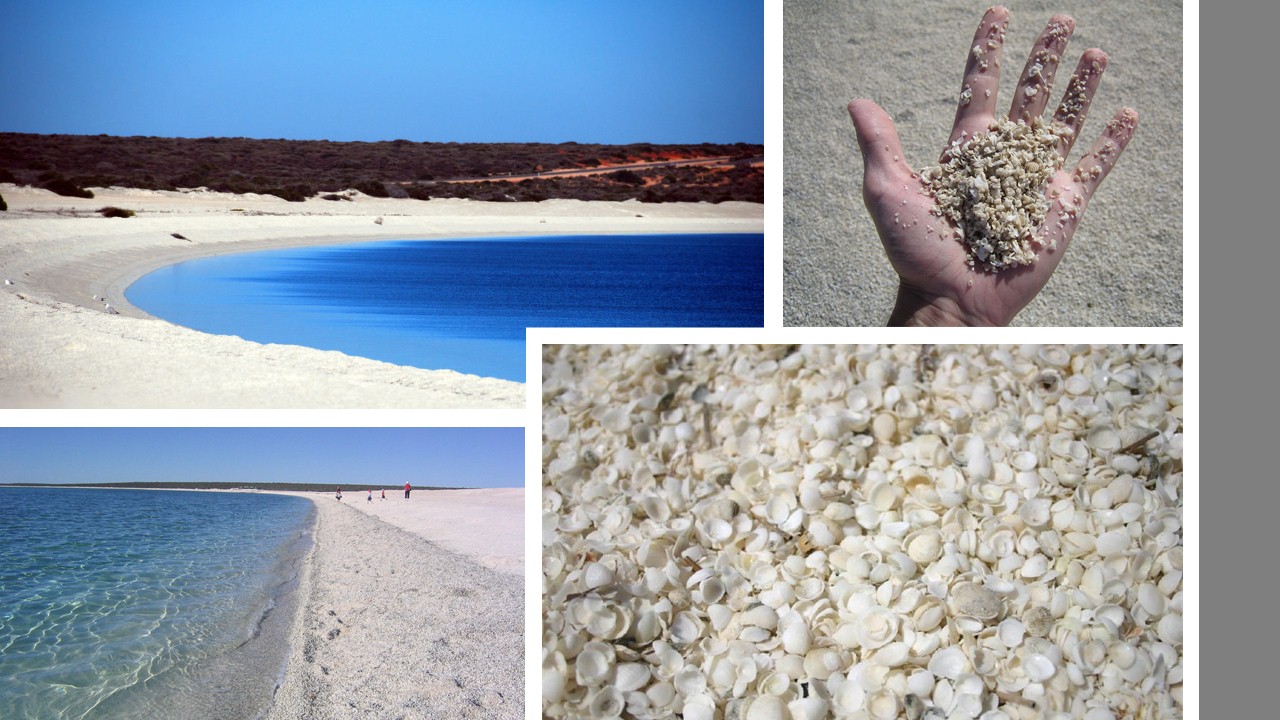 An Australian beach made of tiny shells instead of sand.

Shell Beach is one of only two beaches in the world composed entirely of shells, and was created by a unique combination of geography, climate, and marine vegetation.

Shell Beach sits on a narrow isthmus within Shark Bay, a peculiar inlet on the coast of Western Australia. Shark Bay is a UNESCO World Heritage Site, thanks to the proliferation of unique marine life found in and near its waters – including dugongs ( relatives of manatees), Ind-Pacific bottle-nose dolphins (who use tools – specifically, sponges to protect their noses while they scour the seabed for food), various whales and whale sharks, and the largest sea-grass bank in the world. That last one might seem underwhelming, but it contributed to the formation of shell beach.

Shell Beach wraps around the southern end of L’Haridon Bight, one of the most interior precincts of Shark Bay. As a bay in a climate with more evaporation than precipitation, located within a larger bay featuring a massive sea-grass bank blocking tidal inflow, L’Haridon Bight boasts a salinity level twice that of the ocean. This is known as “hyper-salinity,” and it is a favorable to the survival of some marine animals like cockles and is unfavorable to others such as animals that eat cockles.

Thus, L’Haridon Bight has been a veritable cockle paradise for thousands of years, allowing the little bivalves to propagate, flourish, die, and have their shells wash up on shore over and over and over again, enough times to create a dazzling snow white beach 110 kilometers (68 miles) long and 10 meter (33 feet) deep.

The volume of cockle shell matter produced here is so great that it becomes compressed into a special form of limestone called coquina, which was mined around Shell Beach for the construction of buildings in nearby Denham until the UNESCO protection began in 1991. Today, special licenses are still granted to mine the shells as a source of calcium for mulch and poultry feed. The hyper-salinity of L’Haridon Bight keeps out predators of humans as well as cockles, making Shell Beach a popular place to go for a swim.