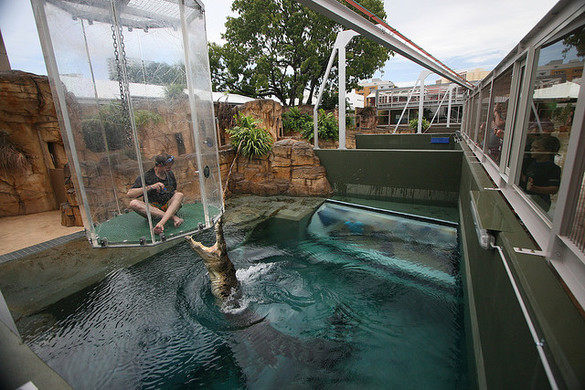 Crocosaurus Cove is more reminiscent of Jackass and Jaws than the average tourist attraction.

Willing visitors are put into the reassuringly-named Cage of Death, a 1.5 inch thick glass enclosure that park officials claim can withstand the attack of a wild, toothy beast. The glass box is lowered into a salt water tank, where the jaws of choppa, a monstrous and aggressive 18 foot crocodile, wait anxiously for a snack. Meat is attached to the bottom of the cage and thrill-seekers spend 15 harrowing minutes below the surface, as the nasty 2,000 pound croc thrashes at the sides. Despite the protection of the glass, scratches from the predator’s teeth are visible on the cage, and even hardened adrenaline junkies are reminded of the danger they face on the other side of the glass.

Saltwater crocodiles , which can grow up to 20 feet long, are very common in the Northern Territory and are a basic part of life for many Australian’s, which helped to spur excitement over the cage. Warnings at most bodies of water often frighten away visitors, but the chance to visit safely with the famous reptiles down under was an instant attraction.

Opened in July 2008, the Cage of Death instantly caused waves with its $35 million dollar budget as well as animal rights concerns that the crocodile was being harassed at the park. Those concerns have done little to dissiade visitors, who rank the thrill of near death by crocodile at the top of the adrenaline scale. Along with the Cage of Death, the crocodile from “Crocodile Dundee” is also housed at the park, along with many other species of fish, snake, and reptiles.