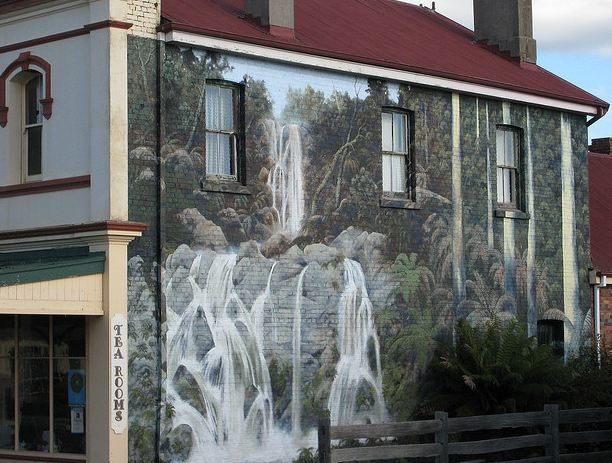 Dams are blamed for ruining a lot of things. Their construction often leads to the destruction of wildlife habitats, the choking of a river, or even the flooding of a town.

But in the tiny Australian town of Sheffield Tasmania, it wasn’t the building of a dam that caused problems it was when that building stopped.

Sheffield, always a rural town, experienced a population boom when several hydroelectric plants were constructed nearby. Once that construction finished, however, large segments of population left, leaving the town with an economy and infrastructure on the brink of collapse.

But sometimes, precipitous population declines simply aren’t enough to kill a town with a particularly plucky bureau of tourism, and that’s exactly what Sheffield has. Emboldened by the stories of other towns who reinvented themselves as tourists destinations, Sheffield’s leadership encouraged, commissioned and created murals on the side of every building and on the face of every structure in town.

Almost immediately, Sheffield announced itself as a “Town of Murals,” complete with a comprehensive marketing campaign.

Of course, such an ambitious title commands results, and the murals have only grown in number and artistry since that time. The town got the results it wanted as well. It’s now well – regarded as a popular tourist destination and visitors flock to the rural hamlet not to work but to view the oddly engrossing and encompassing art that now decorates the town, and likely will for years to come.