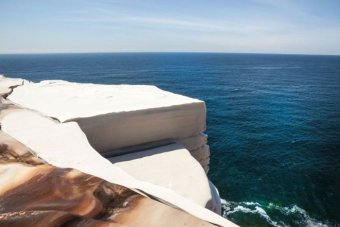 Although it seems like a carefully crafted sculpture with its bleached white colour, illusion of layers, and straight lines, this incredible cliffside is an entirely natural formation. unlike the iron-rich and orange-tinged sandstone found across the rest of the area, Wedding Cake Rock is a light limestone. Its peculiar shape is the result of fortuitous original formation and millions of years of erosion.

Suspended at 82 feet above sea level, the cuboid rock is almost impossibly scenic. Unfortunately, its beauty may also be its undoing. Time has been tough on the spectacular formation, and a steady stream of photo-happy tourists have sped its decline.

Although new viewing platforms are in the works, public access to the rock was closed off in 2015. A recent geotechnical assessment of the formation by New South Wales National Parks and Wildlife Service found Wedding Cake Rock to be “precariously Balancing on the edge of the cliff and severely undercut.” The implication is that the entire rock formation could collapse into the ocean… in as little as ten years time.

Curious visitors wanting a slice of Wedding Cake Rock’s incredible views are advised to make their way up to the cake sooner rather than later, before the Tasman Sea gobbles up more than its fair share.